I signed up for this race in January, just after having done the Resolution Run as I had set myself the target of doing a 10k this year, and having discovered I could in fact run I figured I would try sooner rather than later.  As it happens I have since done a 10k trail race in the Peaks and started running longer distances by myself, but this race was always going to be a significant one for me as it was a goal I had set myself.

I was initially looking to finish in under an hour and had no greater aspirations than that, but somehow in the intervening weeks I have signed up for the Amsterdam Half Marathon and figuring I'd do it properly I got an Endomondo Premium account so I could set up a training plan - but figured I'd use it to prep for this race too.  Initially it was suggesting I could do about 56 minutes, until it had me do a Cooper Test at which point it dropped it to 53:00.  Gulp. OK, well I guess it knows what it is doing, so I decided to try for that and for extra motivation set myself up a sponsorship page.

Come the weekend of the race I was planning on going for a swim Friday night and resting up for it, however the pool was closed after work so I came home and had a few beers, then off to bed.  I woke up early and despite my better judgement decided to pop down to Hillsborough Parkrun and take it easy, treating it as a little bit of a warm up.  Apparently taking it easy means matching my PB from last month's pacing event. Either a good omen or a sign I had pushed too hard and ruined my race...

I managed to have a relaxing Saturday after this and a decent nights sleep, and was up bright and early in the morning. OK, early. I wasn't feeling particularly bright.  A spot of breakfast and a debate over clothing (I decided that as I was gunning for it I would go with shorts and t-shirt, wearing warmer clothes over the top) later and I was on the road.  I got to Rother Valley at about 8am, 1h30 before race start and 15m before the advised arrival time, but registration was very efficient and I had my number within seconds. 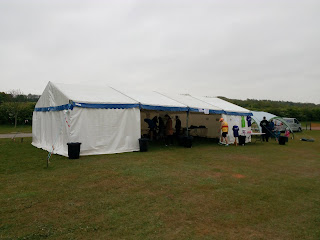 I had a cup of coffee, wandered around looking at the wildlife for a bit, and chatted with some fellow early arrivals about the route, running in general, and how cold it was - I really wasn't relishing stripping off for the race.  Eventually I decided that it was time to take a walk down to the main facilities to use proper toilets rather than queuing for the portaloos, and on the way back I got race ready, pinning my number (24, a nice low number given there were rumoured to be ~500 entrants) to my shirt from the Peakrunners Langsett 10 and attaching my chip to my shoe - first time in a chip timed race for me. Given it was still cold (although the sun was trying to break through) I decided to warm up with a slow jog around the top lake which got my muscles ready and built some warmth.  By this point quite a crowd was gathering and impromptu warm ups were breaking out.  I spotted the pacers and decided to sit somewhere between 55 and 55. 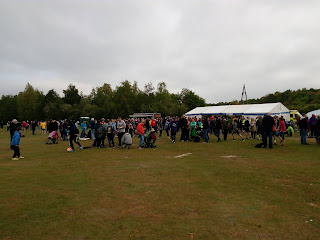 Before I knew it we were in the starting pen, and after a few announcements we moved down and we were off.  Immediately after the start was a sharp right between the two lakes, which was a little congested, but I fell in to a nice pace in a bit of space, well within sight of the 50s pacers, and realised I was running at about 4:30 - too fast!  I backed off a little and found a comfortable pace at around 5:08 and was within sight of the pacers still.  I ended up passing them at one point and staying just in front of them until around the 3km marker, where my overall pace was showing 5:02 and they decided to pick their pace up slightly to ensure they came in at under 50:00.  I reminded myself that I was running my own race and not theirs, but already in the back of my mind a voice was saying "maybe you can break 50:00!" - I decided to stay within sight of them if I could, and then try and pick the pace up in the 8th and 9th kilometers. 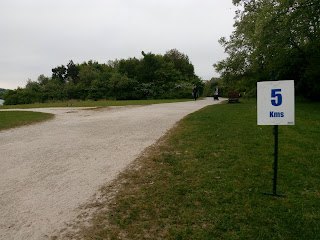 Before I knew it we were passing the start/finish and getting much encouragement, if I had realised there was water on offer here before I got there I would probably have grabbed one but by the time I had thought about it I had passed them.  At the 5km marker I decided to take on a gel to prevent me flagging - the pace was high and I didn't want to burn out, but at the same time I also decided to relax a little on this back straight as I knew I had just beaten my best ever 5km time and needed to hold some back for the finish - Ks 4 and 5 had been sub 5:00.  Immediately I realised my pace had dropped too low as I was verging on 5:18 and despite that being my target pace before setting off by this point my brain had other ideas, so I kept the pace up in the five zeros. 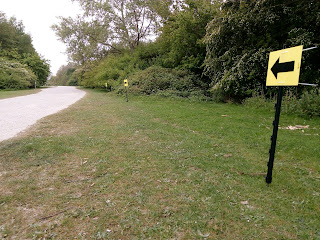 Once I hit the 8km marker I kicked back up to a sub 5:00 pace, and watched my overall pace hover around 5:00.  This time on passing the start/finish I did grab a bottle of water from the ambulance crew watching over us, depositing it in a pile of others shortly after.  The idea of throwing bottles aside carelessly when running seems fundamentally wrong to me, but you can't carry the extra weight and so at least if there is an obvious zone to discard of waste it makes the clean up afterwards easier. 9km was within site and I was picking the pace up again, the closer I got to the finish line the faster I was going and I was jostling for position with someone but really close to running on empty and let them have the place.  Over the line and I stop my watch - 50:04 with a recorded distance of 10:04, I had smashed my target but had I done enough to get a finish time starting with a 4? 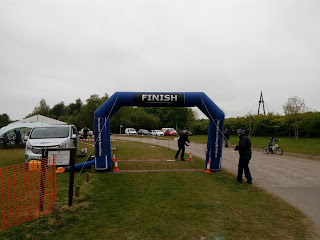 I was presented with a medal by a lovely chap who thanked me for supporting Neurocare (first medal!) and picked up a goody bag and can of Irn Bru before collapsing on the grass to relax, refresh, and let friends know how I had done. 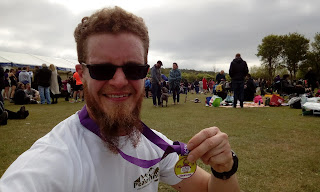 Once I had gained my breath again I cheered runners over the line, then went and got my warm clothes on.  When I came back I discovered that I could get my time on the spot: Chip Time was 50:01 on the official results - so close to breaking that 50 minutes mark, but I can't feel bad about that as I SMASHED my target and exceeded my more recent stretch goal.  I decided to hang around for the 5k as well - for one thing getting out the park would be hard whilst people were still running and I didn't want to get stuck in traffic for the Wednesday game when I got home.  I was glad I did as there was a fantastic atmosphere, lots of fancy dress and kids running, everyone having fun and giving it their best.

All in all it was a really well organised yet relaxed event, the combination of the 10k and 5k meant there was something for everyone and it seemed that people were having fun - even those who did the 10 and the 5.   Best of all it was all for a great cause - Neurocare are raising money to keep the ROSA Robot in Sheffield to improve the quality of neurosurgery provided.  The ROSA robot assists in cranial surgery procedures such as those used to treat Epilepsy, improving precision and allowing patients who couldn't otherwise be treated to receive the opportunity for a better quality of life.  If you have the means, please consider donating to the cause.

With that done it's time for a rest and a curry.  Next up in 2 weeks it's a similar distance but completely different terrain as I tackle the White Peak Trail Run - there won't be on PBs here, I'm just going to enjoy the Peak District :)
Posted by Martin G at 17:55